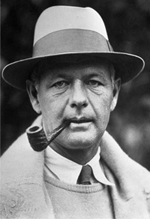 H. Chandler Egan, designer of the Pacific Grove Golf Links front nine, was born in Chicago, Illinois in 1884. His first exposure to the game of golf came at the age of 12. During his teenage years Egan honed his skills in serious competition. While attending Harvard University he was captain of the golf team. In 1902 he won the NCAA Golf

Championship individual title and led Harvard to the team title in both 1902 and 1903. In 1902 he won the Western Amateur, which at that time was one of the premier tournaments in the country and is still contested to this day.

1904 was a year for the record books. In addition to leading Harvard to a third consecutive NCAA team title, Egan also won gold and silver at the Olympic Games held in St. Louis, Missouri, the last time golf was included in Olympic competition (until its re-admittance to the Games to be held in 2016). His greatest achievement, however, was his victory at the 1904 United States Amateur. He followed that up with a second U.S. Amateur title in 1905. Following another strong finish in the 1909 Amateur, Egan disappeared from competitive golf.

Egan moved west, settling in Medford, Oregon and reemerged on the competitive golf scene in 1914. He followed a runner-up finish to Jack Neville in the Pacific Northwest Amateur with a victory over Neville the following year. This would not be the last time these two greats of the game would be paired together.

Egan went onto win the Pacific Amateur four more times in addition to playing on two winning Walker Cup teams. As his championship level play continued, Egan also began an illustrious career as a golf course architect. He designed the Eugene Country Club, as well as several other highly regarded courses in the Pacific Northwest. He famously partnered with renowned architect Alister Mackenzie to renovate the Pebble Beach Golf Links prior to the 1929 U.S. Amateur. Drawing upon his experience on the Monterey Peninsula, Egan designed the original nine at the Pacific Grove Golf Links in 1932. 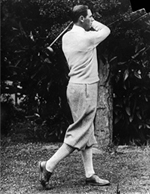 Although much of his early life remains a mystery, Jack Neville, the designer of the second nine of the Pacific Grove Golf Links, left an indelible mark on the game of golf. Neville learned the game from Jim Barnes, the 1921 U.S. Open Champion, at Oakland's Claremont Club. Neville hit his stride at age 21 by winning the last Del Monte Championship and inaugural California Amateur on back-to-back weekends in 1912 at Del Monte Golf Links in Monterey, California. He won again in 1913 and reached the semifinals in 1914.

Neville, who was already a two-time past champion of the California State Amateur Championship, would go on to be State Champion three more times. Neville won his third State Championship in 1919 on the Del Monte Golf Course, the last year the championship match was held at that location. His final two championships were won on his own Pebble Beach Golf Links in 1922 and 1929. Also in 1929 Neville was paired with the great Bobby Jones for the two rounds of medal play in the U.S. Amateur. It was at that U.S. Amateur where Neville's and Chandler Egan's paths would first cross.

Much like Egan, Neville had an accomplished amateur career coupled with a heralded career as a golf course architect. He began his career as a designer with a flourish, partnering with Jack Fleming to create Lincoln Park Golf Course in San Francisco. He then partnered with Douglas Grant to create The Pebble Beach Golf Links. He also had an influence on such famous courses as the Bel Air Country Club and the Monterey Peninsula Country Club's Shore Course.

Following the Shore Course redesign, Neville sought to make an original mark on the Monterey Peninsula. While he had paired with designers in the past, he saw an opportunity to create a traditional links layout as a complement to his old friend and golfing nemesis, Chandler Egan's front nine at the Pacific Grove Golf Links. With the Pacific Grove Golf Links now complete, Neville was able to see the fruits of his labor and for the last time, these two champions were paired.

2010 marked the 50th anniversary of the Neville's design of the back nine at The Pacific Grove Links.

Ready to Reserve your Tee Time?